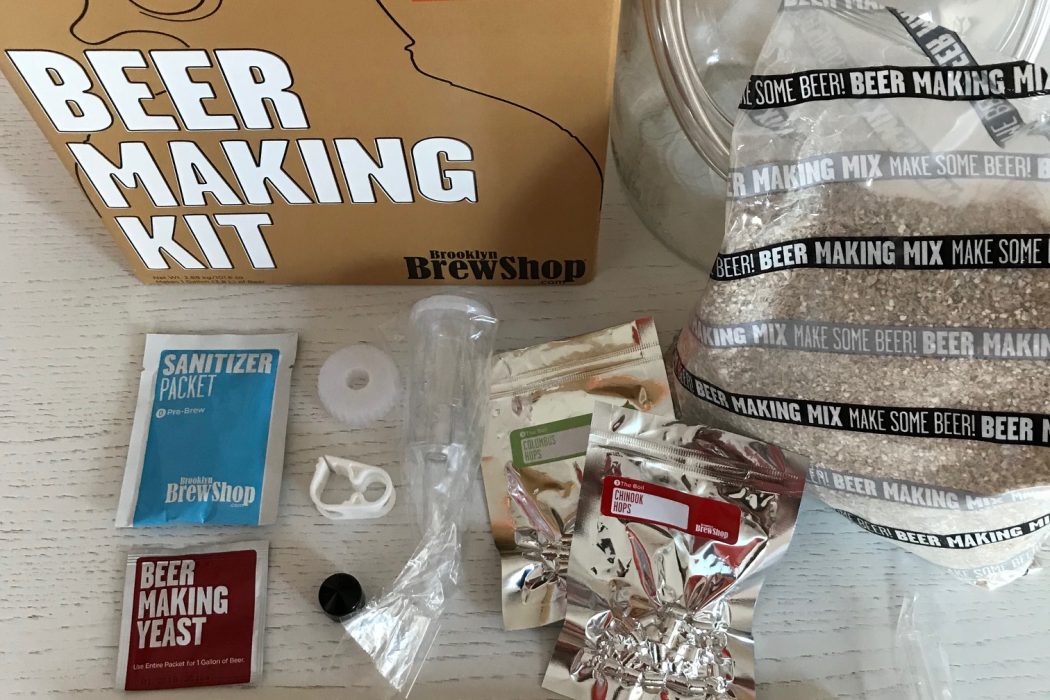 Through a Bunz trade, I acquired a Brooklyn Brewshop Everyday IPA 1 gallon beer making kit with an impending expiry date that would force me to take action, and soon.

Brooklyn Brew Shop started in 2009 with the idea that making real beer from real ingredients can be simple, tasty, and fun. They created easy-to-use Beer Making Kits especially for stove-top brewing and ingredient mixes for seasonally inspired beers.

The small but heavy box purported to have everything inside that I’d need to make a jug of hoppy suds, including the jug. 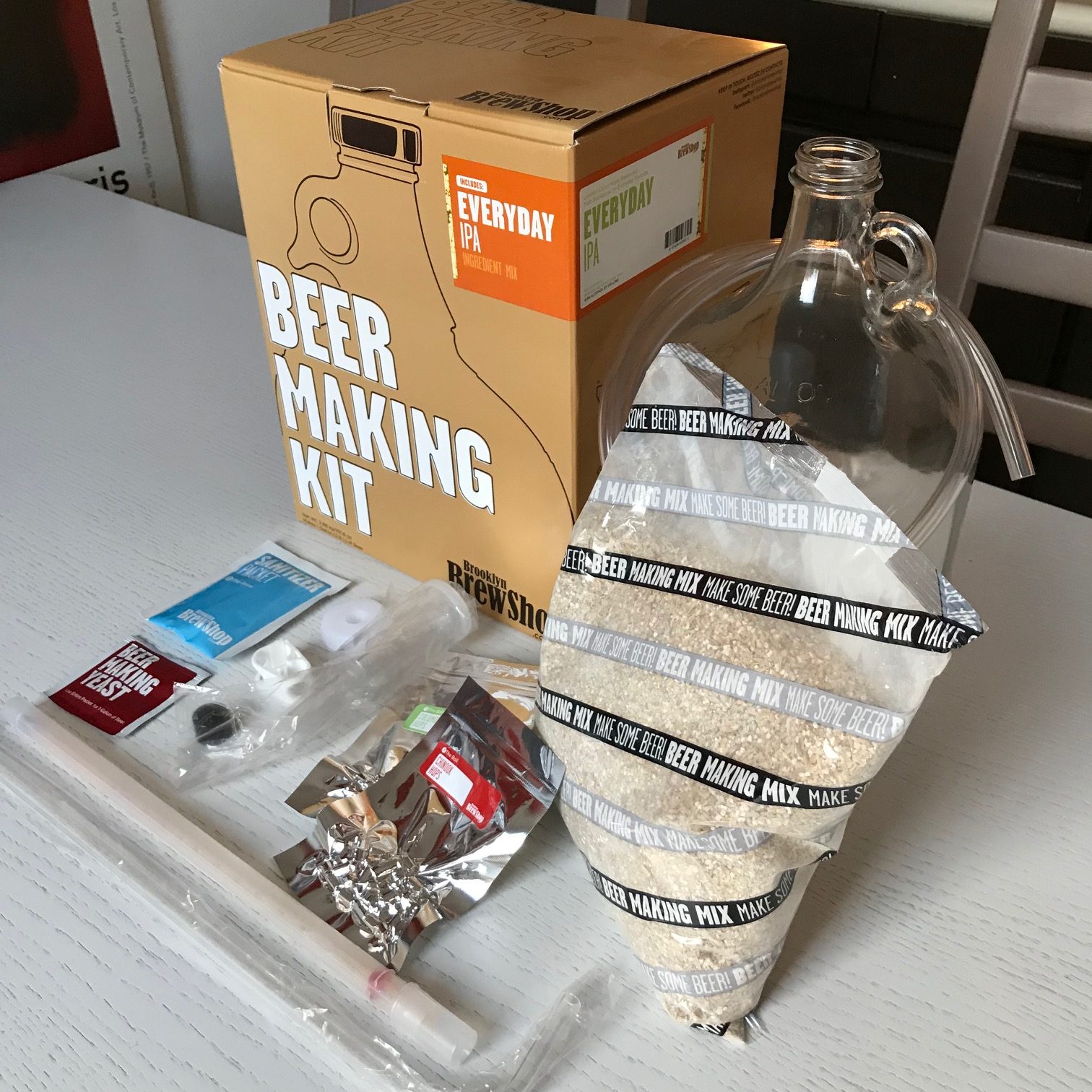 The contents of the kit.

The first step was to sanitize everything. The instructions state that, “if things are not completely clean, your yeast will die. You will not drink good beer, and the next steps will only provide you with a valuable learning experience* instead of a decidedly more valuable drinking experience.”

* More on this later. 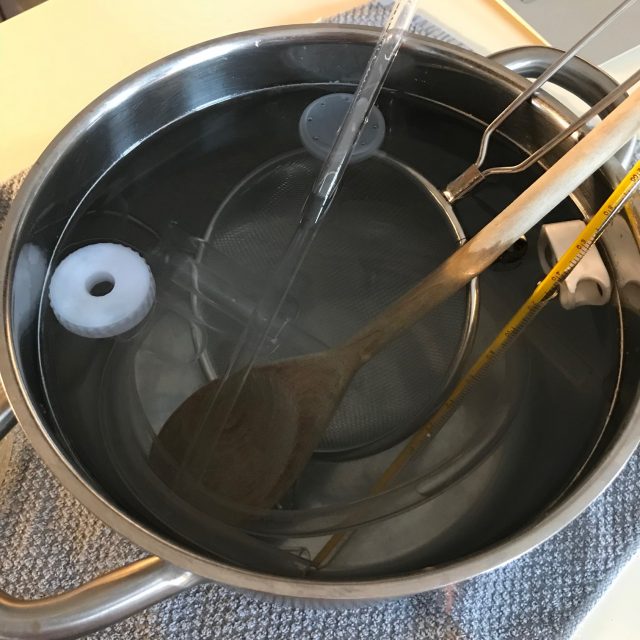 I literally soaked everything, including a big pot, wooden spoon and sieve. Note the absence of a funnel. 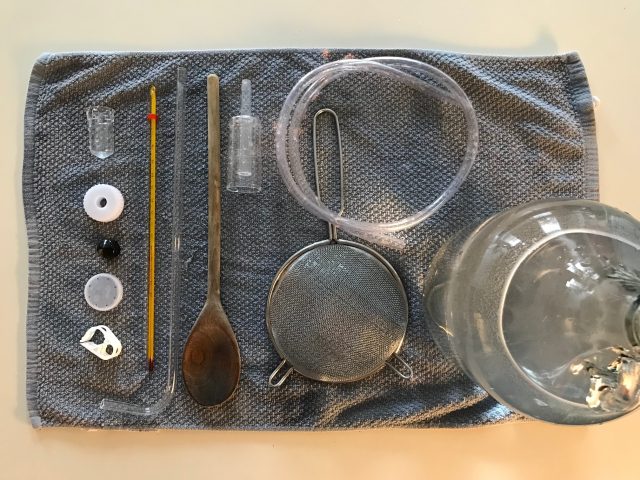 Laying everything out to dry.

I had to do a few conversions between fahrenheit/celsius, and litres/gallons, but it was actually incredibly easy to heat the water to 71ºC and keep it there using the thermometer. I took my readings from a shallow depth as the bottom of the pot was obviously hotter. It crossed my mind that a sous vide machine would make this part a cinch. 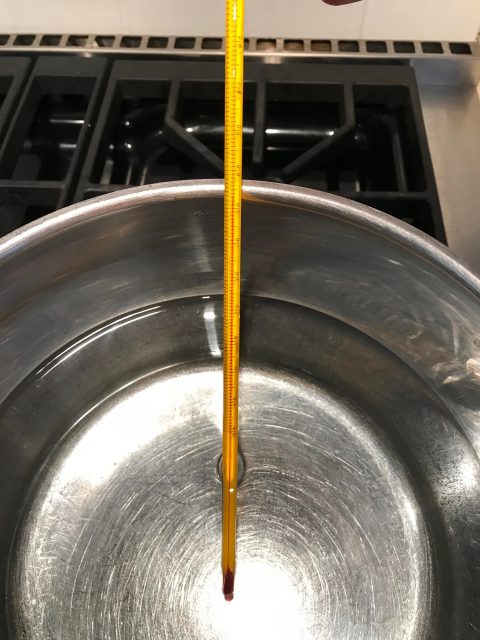 If you’ve made porridge on the stove, mashing in/out will seem eerily familiar. 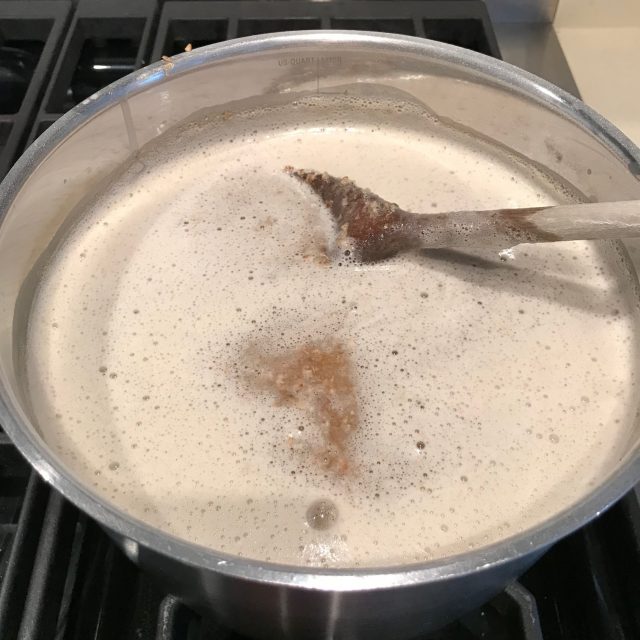 I heated more water to strain my hot grain mash and set up a bowl for the strained mash. 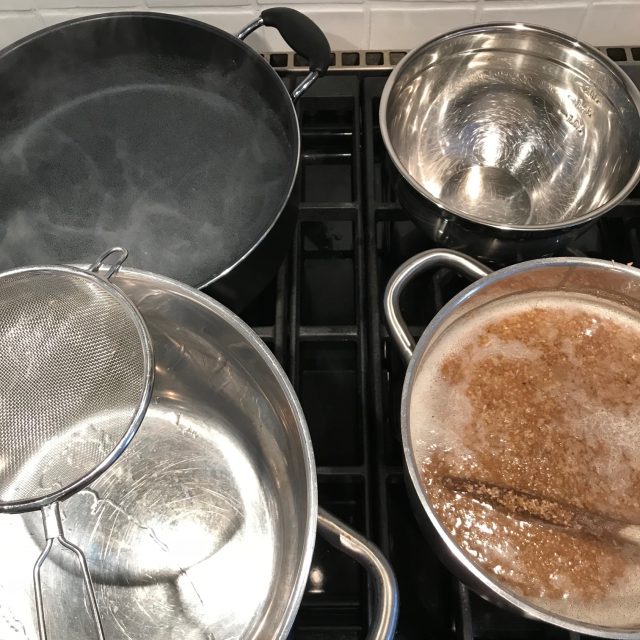 This is where a larger strainer would have come in handy. Cheese cloth or a spatula spatter guard would probably work as well. 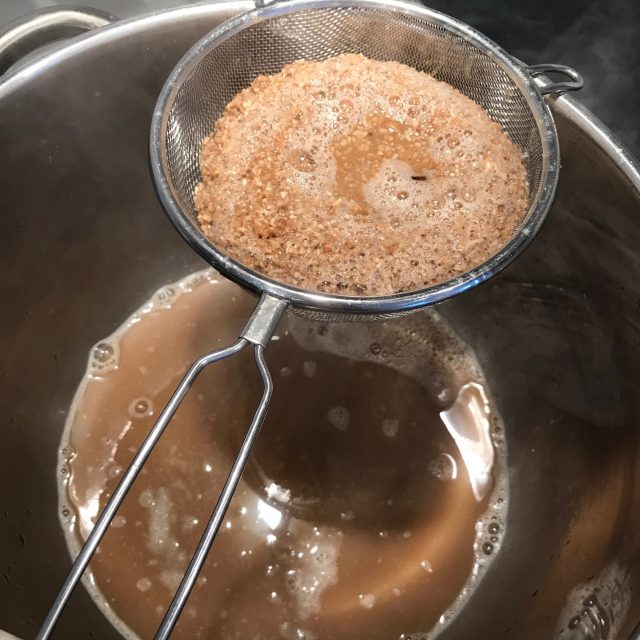 Lauter tun (a strainer over a pot).

I’ll be honest, I ate some of this. It was sweet. I guess that makes sense, because I just boiled the crap out of a bunch of grains and squeezed out the sugars. 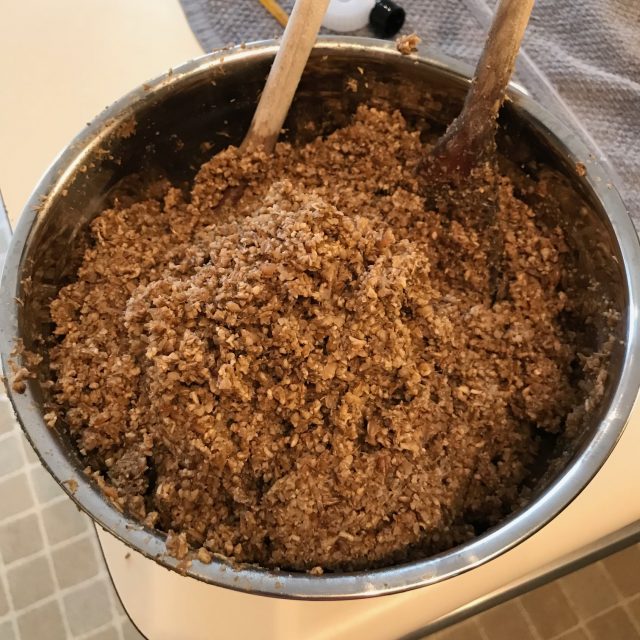 The boiling wort “broke” and then I reduced the heat. 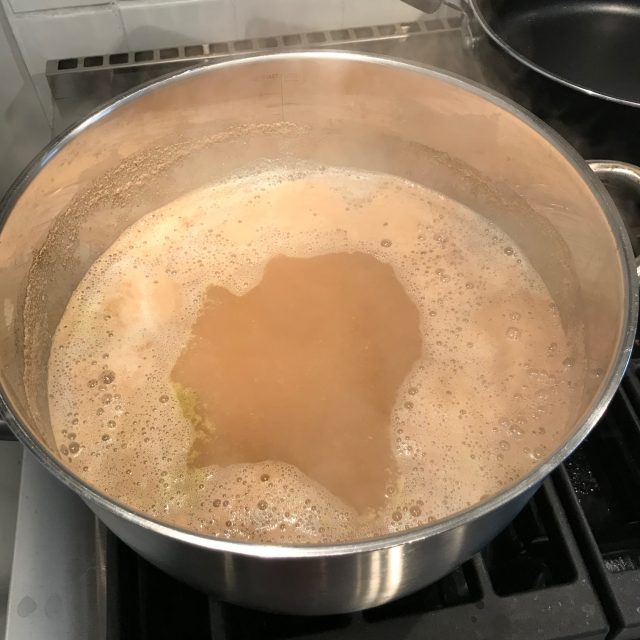 I found it helpful to keep a lid askew on the pot to maintain temperature and reduce moisture loss to evaporation. 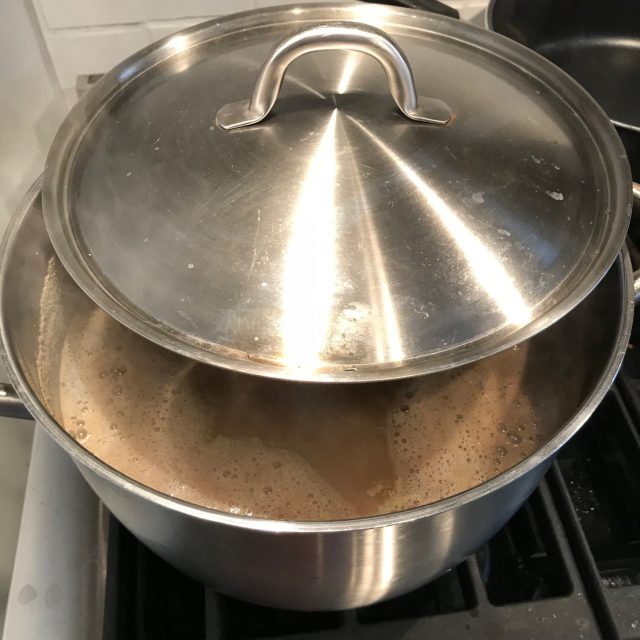 The instructions called for two varieties of hops to be added to the mixture at set intervals. 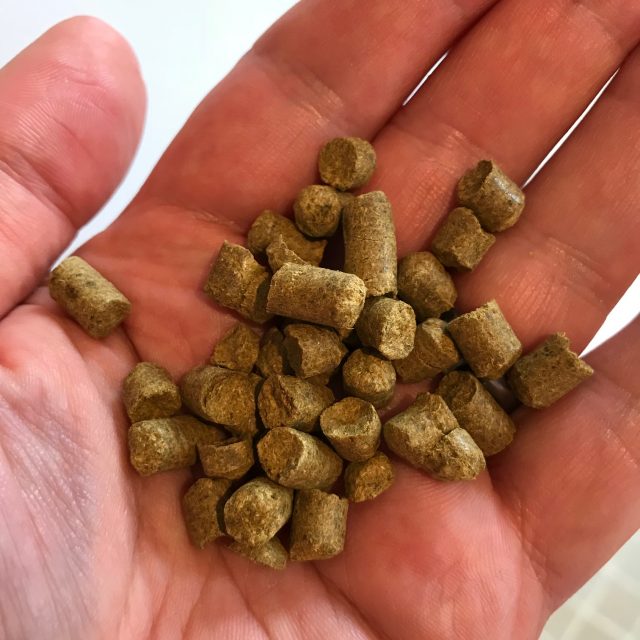 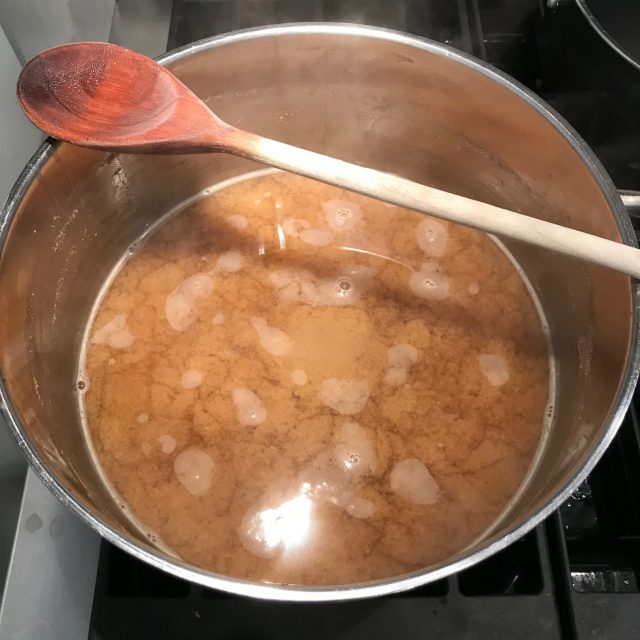 Wort with hops added during the boil.

It was at this point that I put the pot in the sink with a bunch of ice and ran cold water and fucked it all up (alcohol might have been involved). I walked away briefly and the running water broached the lip of the pot. User error. I caught it just as the pot overflowed and came even with the water in the sink. Disaster.

With several hours and much optimism invested thus far, I was crushed. I came very close to just dumping everything down the drain and calling it a day, but instead poured out an appropriate amount and attempted to salvage what was left. It still looked brown and murky after all.

Without a funnel, I sadly lost even more volume as I transferred it into the jug and then added half the yeast and shook.

Disgusted with myself, I also stopped taking photos at this point… 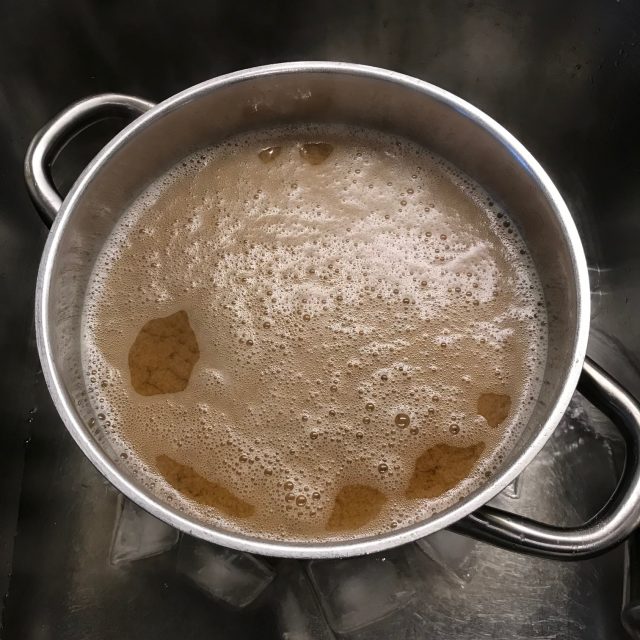 …until I removed the jug from it’s dark and lonely place where it had been hiding for the last two weeks. There was a scummy ring where it had been vigorously bubbling when I first added the yeast. Because of my reduced volume, I adjusted the amount of honey I added to an empty 2L pop bottle, preferring to bottle the whole thing for consumption in one go. 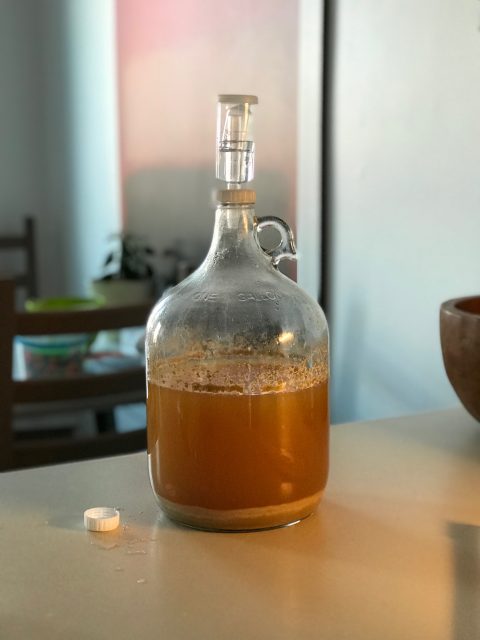 Which was probably still too much honey as it foamed up when I unscrewed the cap after another two weeks in solitary, leaving me with only about 3/4L out of the original gallon of Everyday IPA.

It was, however, delicious. 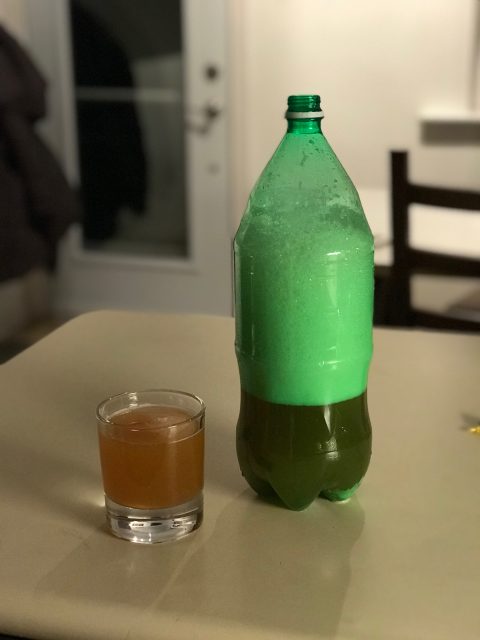 TweetYumForagers Table in Chelsea opened in 2012 with a firm belief that every product they sell should be locally sourced, sustainable and organic. Foragers also has…