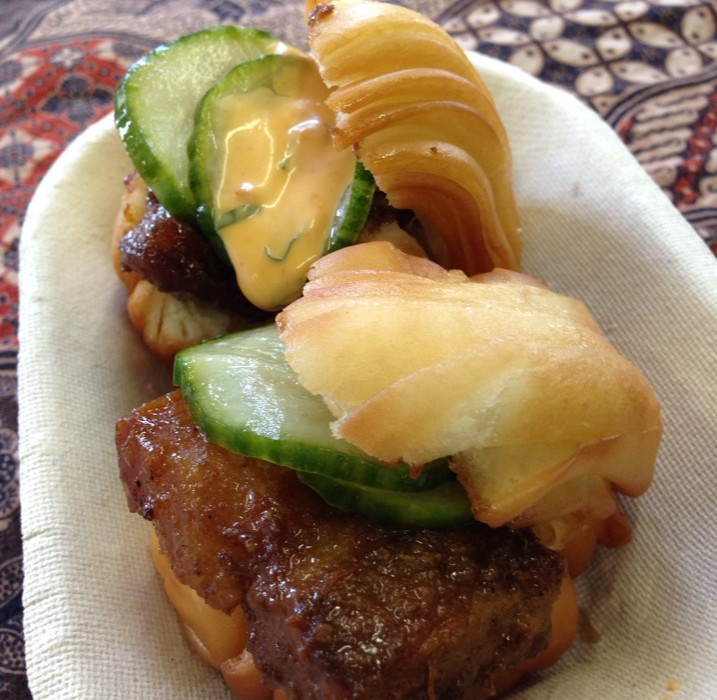 With that in mind, here in Toronto, we all scream for dim sum … and there’s a new food festival for that.

As a follow-up to the successful Yum Cha event earlier this Spring in Toronto, Food Truck Eats organizers Suresh Doss and Frank Kocis put together another sold-out event Yum Cha (Part 2) which took place on May 4, 2014, featuring a new venue and food lineup. The event featured 10 acclaimed food vendors including Momofuku, Chantecler, Parts & Labour, and Globe Bistro. There was even a “traditional” (and in fact, my go-to) Chinatown dim sum purveyor, Dim Sum King. Inspired by dim sum, Yum Cha’s dishes were bite-sized and delicious, savoury and sweet. Beer was offered by new local Left Field Brewery.

The warehouse at 36 Wagstaff Rd, just next door to Left Field Brewery, was a nice little venue. It felt like we were crashing a daytime rave (a bare industrial space with no signage). Food was a little pricey at an average of $5 a dish. However, we were happy to sample some real gems such as Babi & Co‘s Pork Belly Slider, and FeasTO‘s Tom Yum Dumplings. We left oh-so-full!

Here’s a slideshow with the highlights.

TweetYumThese cookies are great because they combine the decadence of chocolate with the goodness of kale. Every member of your family will enjoy these…