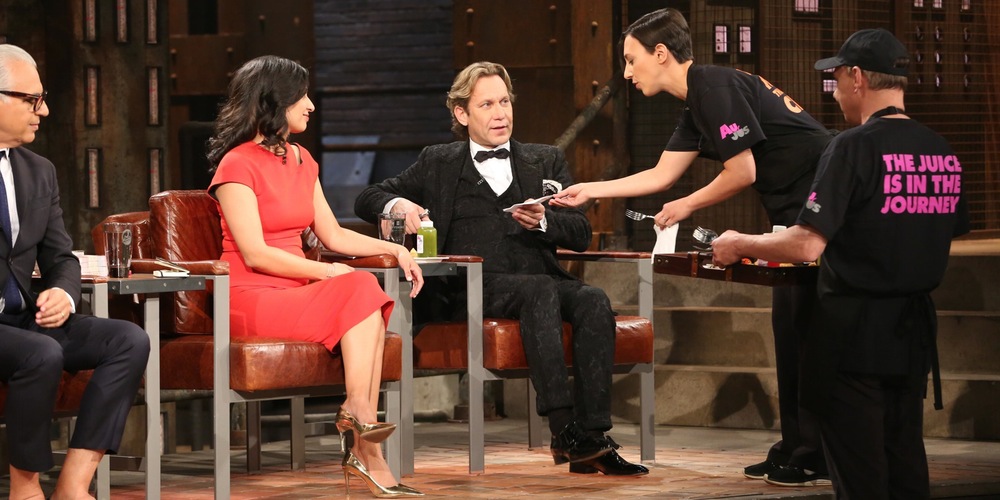 One of my first LettuceMeat feature articles back in 2014 covered Toronto-based YamChops, arguably the world’s first “Vegetarian Butcher”.  Notwithstanding the clever juxtaposed food noun name (teehee!), YamChops has been at the forefront of a global food movement. More people than ever are looking for delicious meatless foods – whether for health, ethical or environmental reasons. YamChops appeals to both vegetarians/vegans and flexitarians (like my own family) with delicious food and extraordinarily friendly service. Over the past year or so, they have expanded into catering, third-party distribution and broadened their selection of gourmet prepared foods. They continue to get franchise requests from all over the world. And lucky for me, they live just down the road from my house! 🙂

So I was excited when Michael Abramson, co-owner and visionary behind YamChops, told me last summer that they had just filmed an episode on CBC’s Dragon’s Den. Fast forward several months later, I was totally psyched to be receive an invitation which read:

When we opened YamChops Vegetarian Butcher & Prepared Foods Shop in June of 2014, we never imagined the earthquake of media attention our paradoxical “meat” market would attract…or the aftershocks that would echo across North America as more vegetarian butchers hung out their shingles.

The flyer went on to say that YamChops was invited to appear on CBC Dragons’ Den and that there would be a special live screening of the episode, along with “most extra-ordinary eats, storytelling by Michael, Toni and Jess, and an opportunity to join us in growing the PLANT- POWERED movement.” Of course, I couldn’t wait for the screening!

I arrived at the Revue Cinema in Roncesvalles at 6:30pm sharp (per invitation – didn’t want to miss any of the food or action!). In true YamChops style, the Abramsons were greeting guests in the front lobby. I walked into the theatre and saw lots of people had already arrived. A slideshow was showing many happy moments at YamChops, along with some teasers from the Dragons Den. 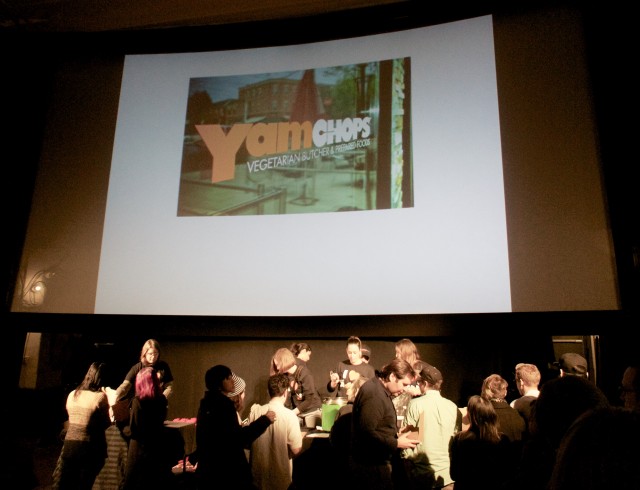 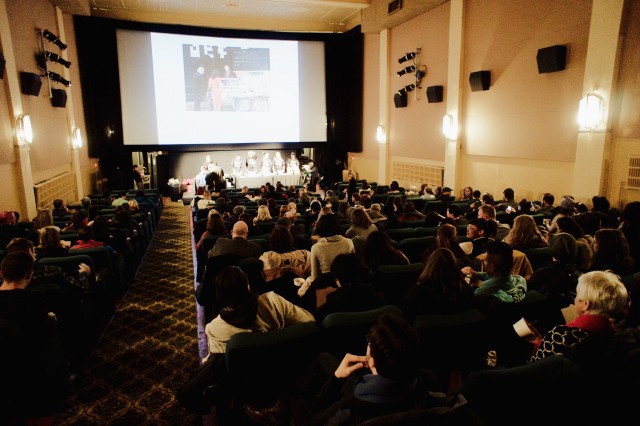 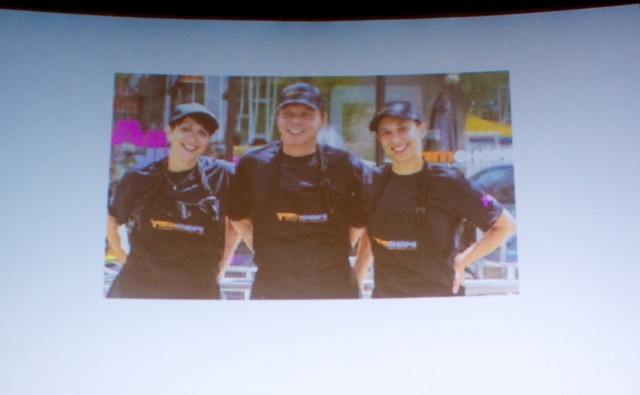 I quickly threw my coat on an empty seat and headed straight for the food queue, eager to see what was being served which included: 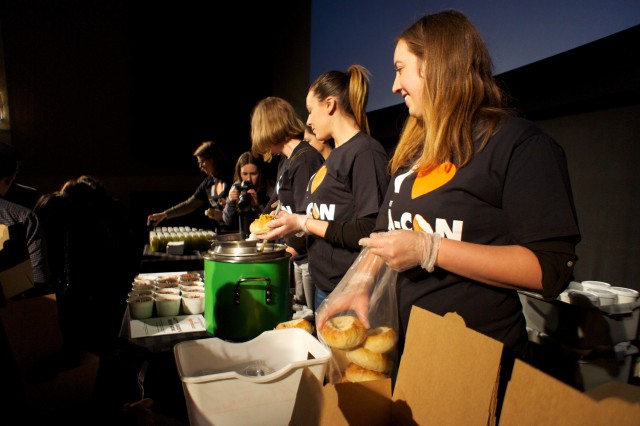 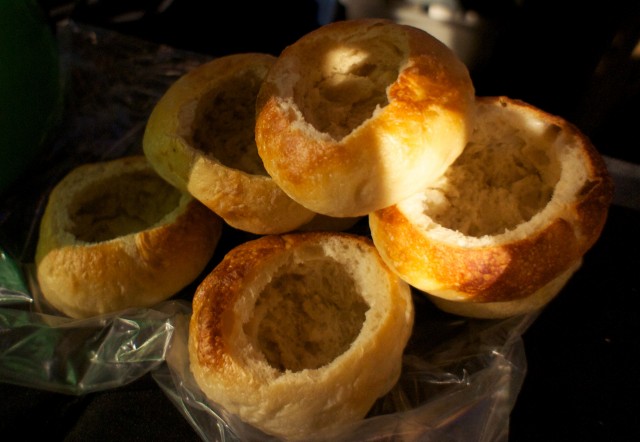 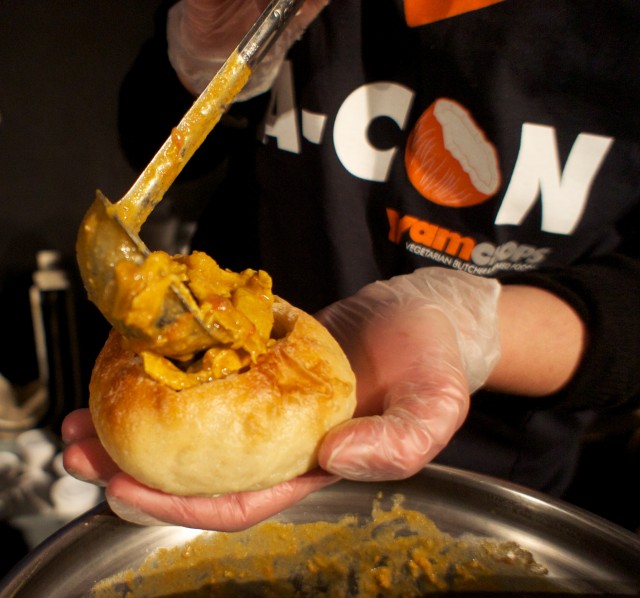 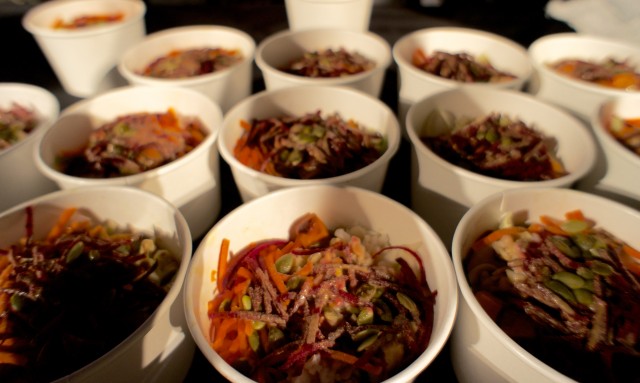 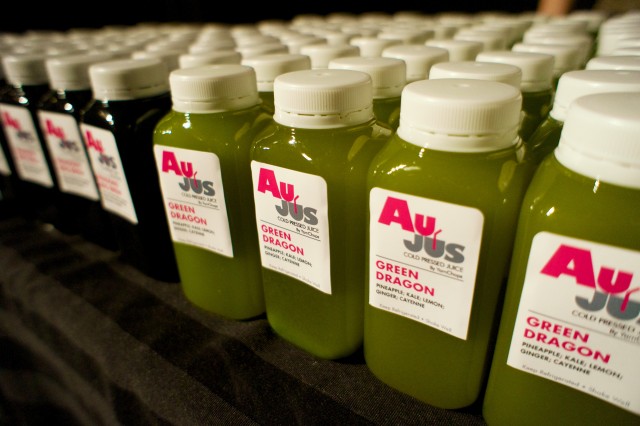 My YamChops “Dragon” meal in a box! 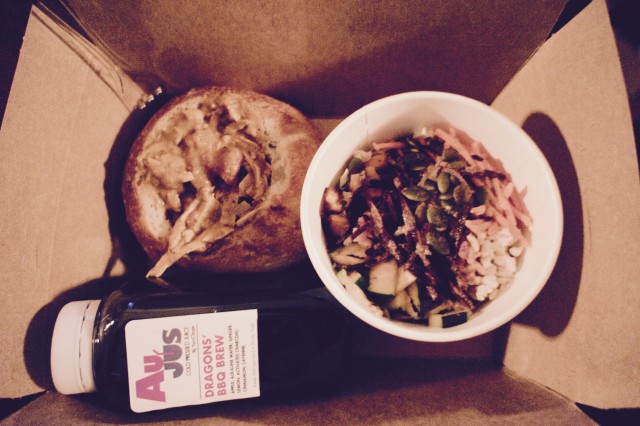 Everyone, including me, devoured the delightful vegetarian meals, and – in the spirit of film screenings – rushing the line for seconds when offered. Then, Michael, Jess and Toni shared funny and touching stories about food, family and love. Michael talked of his early childhood memories, reluctantly visiting the stockyards with his Romanian-Jewish grandfather, and of his grandmother’s unappetizing schmaltz (rendered poultry fat). Some of this, he laughed, contributed to his decision to go “veg”. He reminisced about his vegetarian journey that has lasted over four decades, an accumulation of thousands of meals cooked for his friends and family. I especially enjoyed him describing how his daughters cooked with him from the time they could stand on stools. This reminded me of my own daughters who love to help mama in the kitchen… mess and all.

This all culminated in Michael’s late-life decision to retire from advertising and realize his dream of opening YamChops. 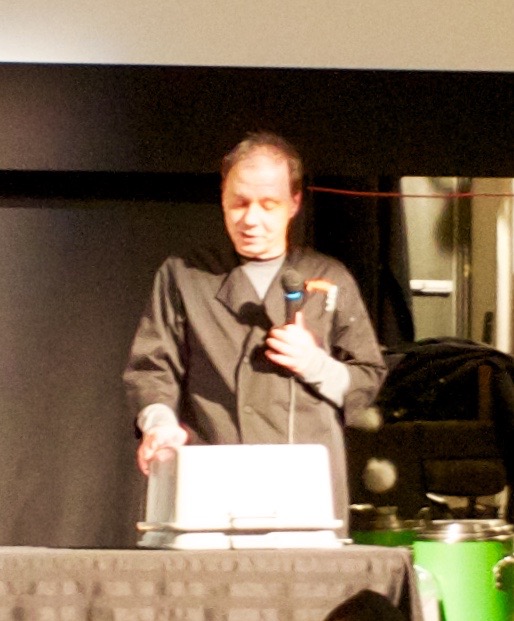 And then came the moment we were all waiting for! Dragon’s Den on CBC! YamChops was first up on the “family affair” episode. 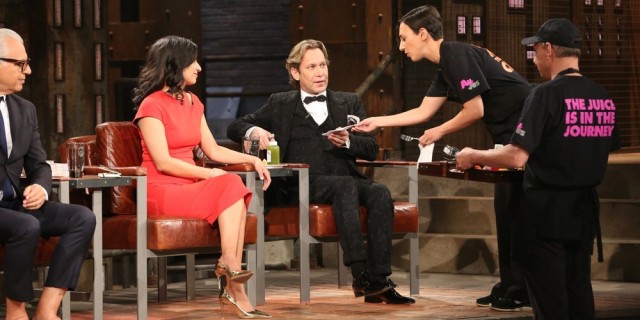 Considering the huge pressure and nerves, the YamChops crew delivered a flawless pitch, asking for $250K for 20% of the company. They talked about the success they’ve had since their 2014 inception, their expansion into catering, resale through other local veggie shops, and the MANY requests to franchise the business. Their proposal to the Dragons was to use the funding to franchise business.

What was the verdict?

The dragons LOVED the food, especially YamChops’ top-selling Szechuan Be*f and Carrot Lox. However, one by one, the Dragons were “out” of the deal. Things started to look rather dire when suddenly four out of five Dragons were out. The suspense was deadly as we all held our breaths in the theatre! The final dragon, Jim Treliving (Boston Pizza franchise mogul) finally saved the day, offering $250K for 30% of the company and 50% of the decision-making. After a quick family conference, the offer was accepted. The theatre audience all breathed a huge sigh of relief and cheered!

I continue to be inspired by YamChops – the little veggie business that could. It’s a story of ambition, hard work, and family-first attitude… all while touting the importance of laughter in the mix. Check out YamChops as soon as you can if you are in Toronto (or if a franchise comes to your town)!

TweetYumEvery week we serve up a generous helping of links to content focused on what’s happening in the giant kitchen we call the Internet….